The outsourcing industry is the source of countless direction-related terminology. Each new sourcing model is sending you either in or out, off or on, near or far…is there an over and under yet? As the efficiencies of the outsourcing grow, so do the outsourcing trends, models…and the industry lexicon. Every new model, it seems, has a twin in its antonym—in the opposite direction that the models describe. Therefore, while everyone is figuring out (out)sourcing, let’s not forget about its equally intriguing twin: in-sourcing. 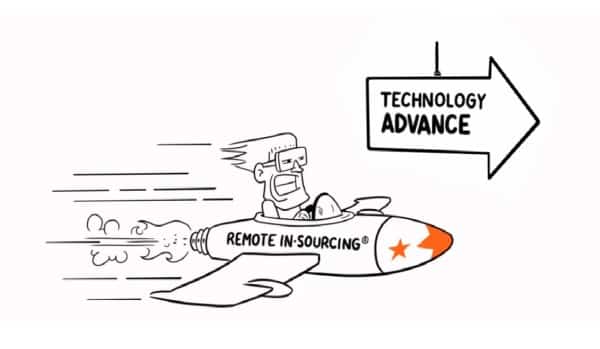 The whole of Outsourcing is generally defined as sub-contracting of non-core activities to a third party, so instead, clients could concentrate on their competitive advantage. It began as a way to limit costs by giving the responsibility of IT departments to industry giants like IBM or EDS. At first, companies outsourced their non-core competencies, but by 1990s with the internet increasingly providing business opportunities, more companies tried to outsource their strategic functions. As such attempts became unmanaged, with limited controls and standards, many ASP companies went bankrupt and trust in outsourcing diminished.[1]

New guidelines were written and more accountable and outlined contracts were demanded. As a result, for almost ten years the industry has been working with “scalable” outsourcing and pay-per-cost contracts. Yet again the demands of outsourcers and the industry as a whole are beginning to change as more flexible, but still reliable, sourcing models are being introduced.

In recent years, there is a sudden shift to providing high-value service and strong central governance based on customer needs rather than traditional outsourcing business structures.[2]

Some call not for outsourcing but for contracts akin to joint ventures and partnerships. Other companies prefer to open their own offshore offices to cut costs but maintain quality.

Some outsourcing providers saw this shift as a major opportunity to create new outsourcing models that would allow clients to save money but retain control of team management and product quality. Alongside outsourcing models evolution, the improving quality of technology and networks allowed more and more employees to work virtually, without having to physically enter a workplace. It is amidst these changes that the concept of Remote In-sourcing was created.

Before diving into what Remote In-Sourcing entails, it is imperative to sort out some of the terms in the ever-growing dictionary of outsourcing words.

Outsourcing is a well-known term indicating delegating a certain job outside of a business to a third party. In-sourcing, unlike outsourcing, tends to be a more convoluted term. It is generally known as the opposite of outsourcing—when a company seizes to send certain jobs outside of its premises and brings them back in-house. “Delegating a job to someone within a company, as opposed to someone outside of the company.”[3] There are two possible ways in which this can happen, however.

First, a company can apply in-sourcing by employing its own people to do the job in-house thus ceasing to outsource [4] (this is also called backsourcing if the company previously had outsourcing contracts). In this sense, there is only one company in the picture, and they take care of all of the processes: hiring, training, payroll and infrastructure costs.
The second in-sourcing method, however, is when a company invites a third-party provider to come into their facility to complete a project. This kind of relationship can range from a snack-stand operating within a stadium owned by a different company, or a team of software engineers working at another company’s facility to operate an internal computer department. [5]

The software development team is thus integrated into the company’s offices and as a result, they work much closer with the company’s in-house staff than traditional outsourcing employees ever could. In this way, the third-party company takes care of all of the hirings or training the ‘home’ company may need.

The third-party team works in a virtual office space and completes the tasks as if they were the employees of the outsourcer company—working directly with the in-house staff to complete the projects.

In this sense, the home company has full control over their Remote In-sourcing team and their results. This new in-sourcing model allows just as close of cooperation between the in-house staff and the third-party professional team, despite physically being located in a remote location.

As a result, the model offers the benefits of in-sourcing—close cooperation and expertise—without the traditional expenses. The physical facilities that are used by the third-party teams are maintained by the outsourcing provider at the remote location, and the virtual facility is all that is left to maintain.

Remote In-Sourcing thus offers more flexibility and quality management than traditional outsourcing models, while being one of the most cost-effective ways to create a private (in-sourcing) team of specialized experts. It seems that new directions are invented every day — and sourcing is no longer simply out, it can also be in.

This article was contributed by Diana Kontsevaia.