Google’s SEO algorithm is being continually changed. It’s getting more developed to provide Google users with quick, helpful, and relevant search results. As some unethical SEO strategies have often influenced the search results, Google has to bring frequent updates to provide fast and reliable products. Google modifies its SEO algorithm several times a year. With the modification of the algorithm, drastic changes come in the ranking factors. Thus, the influence of ranking factors differs over time. It has become tough to predict what’ll be the future ranking factors. Nevertheless, whatever changes come in the technology, we should get prepared to become accustomed to it. At this point, we are going away to talk about Google Effective SEO Ranking Factors 2021.

So, what are the new ranking factors for the Google SEO algorithm in 2021 and later?

In this year, social media have overtaken backlinks as a ranking signal. Nonetheless, whatever changes come in the searching algorithm, we should have a clear idea about SEO and Google algorithm update to rank better in the search results. This article will be a thorough discussion about the most important ranking factors that should be considered for higher ranking in 2021 and the future.

There is no doubt that content is still the king. It’s the top and everlasting ranking factor and not going to be changed in 2021. If the content is not amazing, it can’t draw traffic or get backlinks. Even it won’t get shared on social media. Now engaging and quality content creation is the #1 ranking factor. Contents that are long rank better. But the content should be created so that it becomes beautiful and relevant and makes people share with others. Contents that are written in between 600-1,000 words rank better. Incorporating related images and videos in content has recently been considered as a smart representation and also has a positive impact on ranking. To better rank in Google, you have to know how to write engaging and traffic-driven killer content.

A great change has come in the way Google will rank sites. In the ranking system of 2015, social media is playing a dominating role and has surpassed backlinks. It’s because good content usually gets lots of sharing and thus receives more social signals.

Stieber published an article where they have done data analysis using the Spearman Rank Correlation model to evaluate the outcome. Based on this analysis, the following graph shows that all social media signals together are stronger ranking factors than backlinks:

Nowadays, people are getting more involved in social media. Therefore, it’s not surprising that social media signals have become one of the leading ranking factors.

Backlinks had a huge importance in search engine ranking in the past years. It’s still an influential factor, but the new algorithm of Google prefers quality backlinks rather than quantity. As black hat SEO techniques use too many bad backlinks to achieve higher rankings, Google concentrates on quality backlinks. So, the presence of too many bad backlinks can be harmful to the ranking of a website, and there are also chances that Google can remove the site from its list.

Some Important Notes on Backlinks:

To improve Google’s ranking, a flawless on-page strategy should be followed. Keywords don’t have the same importance on rankings anymore. Previously, it was possible to rank a website in a higher position just by stuffing keywords. But recently, it’s not even needed to put a keyword in the domain. However, it’s not that keywords aren’t a ranking factor anymore. Getting a higher Google ranking partially depends on the choice of keywords, keywords positioning, and density.

Another graph from Stieber shows that the role and importance of keywords have changed this year. 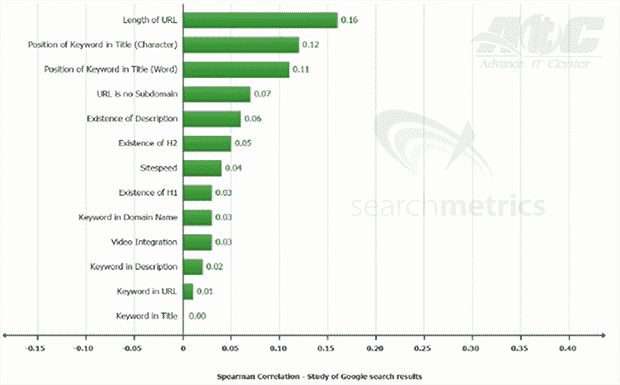 Please include attribution to ShaneBarker.com with this InfoGraphic.

When content provides unique, interesting, and useful information to the readers, it generates more traffic to the website and helps visitors spend more time on the site. It also builds up a social relationship. The time visitors spend on a site is also a factor and termed as ‘Average Time On-Site. As the factor ‘Average Time On Site’ is a metric for the quality content, it’ll be considered for Google ranking 2015 and coming years. Another factor, ‘Bounce Rate,’ is also taken into account by Google, which means the percentage of visitors who come and then leave without viewing pages within the same site. A high bounce rate is often regarded as bad, as it indicates that the quality of the content is not good or not useful, and it can be harmful to ranking.

The newest and most important Google ranking factor in 2015 is mobile-friendliness. It’s the new adjustment in Google 2015 search algorithm. On the Webmaster Central Blog, Google declared that mobile-friendliness (that already have started on April 21st) would be a strong ranking signal. As more people are using mobiles to access the internet, users should get the most recent and relevant results. So, Google is changing its algorithms to adapt to mobile usage patterns.

As more users view mobiles’ websites, Google wants to make it easier for the users to discover relevant mobile-friendly websites. It’s also notable that sites should load fast and easy to navigate.

When ranking search results, Google will also factor in content from mobile apps. Google is calling this new feature ‘App Indexing.’ It indexes apps, and then it shows those apps more prominently in search results. This will work only when users are signed in to Google and have the mobile app installed.

However, Google will not index app content automatically. To see how to implement App Indexing, Google has its step-by-step guide.

Local SEO is the optimization process for the local results in search engines. Google had a great algorithm update, the ‘Pigeon,’ launched on July 24, 2014. Unlike other algorithms, this algorithm focuses on local searches. Google pigeon gives users more accurate local search results on Google Web and Google Maps. This is one of the most important local SEO-related updates and plays a significant role in website ranking in 2015 and after. An article “The 2014 Local Search Ranking Factor” was published by Moz. From the information is provided, the four most critical factors for local SEO are a website, citation, links, and reviews.

Google+ is one of the most important local listings that should be created for local SEO. With the launch of the Google Pigeon and Google My Business, it’s vital to complete all the listings correctly in Google+ and get verified.

As local search updates will have a strong impact on ranking in 2015, it’s essential to optimize business information on Google My business, have a mobile-friendly website, and get listed on business review sites like White-pages, Trip Advisor, Yelp, Supermedia, etc.

Some of you may have heard of RankBrain is a new initiative that Google announced. They actually announced just a few weeks ago now they have an algorithm they call rank brain to bring. It is a machine learning algorithm and is the third most important factor in SEO. The first is still the quality and relevance of your content and backlinks, So the RankBrain algorithm has helped them understand the language a lot better. FAQ: All About The New Google RankBrain Algorithm

Google is changing its search algorithm frequently to provide the best user experience for the searchers. It’s also trying to present relevant and consistent search results by evading irrelevant and junk content. These changes will also stop various types of ranking manipulations caused by black hat SEO techniques. However, Google is also trying to develop itself and enhance its brand name with time. If it can’t provide reliable, useful, and relevant information to its users, it won’t hold its future position. Though Google algorithm will change over time, a quality website with useful and unique content won’t face any problem. Rather, they’ll get benefited from it. In conclusion, it will be wise for the web-owners to start blending Google Effective SEO Ranking Factors in a balanced proportion of their sites. It will help achieve a higher ranking in search results and meet any updates in the future.